Congratulations also are in order to UC Irvine for winning the D2 California State Championships.  A. Inoyue, S, from UC Irvine was named as MVP.

Both winners received checks for $475 in order to cover part of the cost of attending nationals.  Awards are given to encourage teams to attend nationals now and in the future.

The CCVC is proud to announce that the 2014 State Championships will be held at UC Irvine.  The championship tournament is for women’s teams only.

Continue Reading
To help plan for the upcoming season, here are the 2014 women’s events and tournaments: Preseason (October – December) Regular Season (January – April) If you would like to attend one of these events, contact us and we will put in contact with the tournament host.  If any event is missing, you can contact us at ccvc@ccvcvolleyball.org.
Continue Reading

After capturing the north league title, the Stanford women continued their dominating run by winning this year’s state title!  Congratulations to San Jose State for finishing in 2nd place.

C. Yost #7 (LIB) from Stanford earned MVP honors and Stanford’s coach, S. Cavella, earned coach of the year honors.  Congratulations to all those players named to the All-State team. 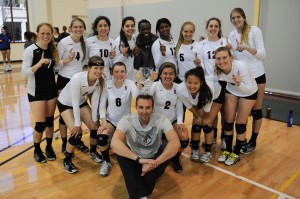